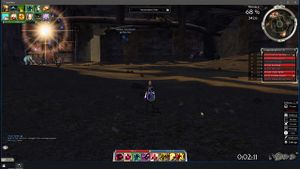 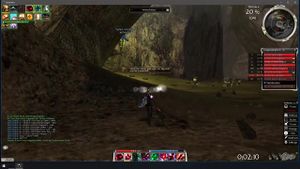 The 欧尔残迹 was originally an armory and storehouse for Orr, before being turned into a refuge for the Queen of Fools crew. After Fendi Nin's betrayal, Glaive escaped, but her ultimate fate remains unknown, and she had to leave the bulk of her crew behind.

Magical energies washed the Tarnished Coast shores after the Cataclysm, making already deadly monsters more powerful from these energies. These energies attracted the Asura as well, who established a secondary Asura Gate to 火星蝇沼泽 within the Shards.

From Vlox's Falls head south. You will also pass through this dungeon as part of 正在寻找盖德. If you have access, you can start directly from Gadd's Encampment (however, if your goal is completing Lost Souls, you will have to visit the other entrance to find Crewmember Shandra; only she can open some of the dungeon locks).

异.If Fendi Nin is killed by a flame jet without any interaction from your party, the Soul of Fendi Nin will not appear. Instead, as you approach the jet, Fendi Nin will respawn with full health.

注.On very rare occasions, Fendi Nin will not spawn. Unfortunately, there is no work-around; you must restart the dungeon.

注.There is an interval of approximately 2 seconds during which Fendi respawns and the soul disappears (these two events do not occur simultaneously - Fendi respawns first). If the soul has been killed before its disappearance and after Fendi's respawn, its death will trigger the chest but will not unspawn Fendi and the archers.